All Music Guide Review
Very Tall, the initial 1961 summit that found pianist Oscar Peterson and vibist Milt Jackson combining forces (with Ray Brown on bass), is considered by many to be among the most artistically successful collaborations in the careers of both musicians. A long 37 years later, and despite Peterson’s 1993 stroke, all three were still going strong when they hooked up as «the Very Tall Band» to play a series of dates at New York’s prestigious Blue Note. Telarc previously released one set of recordings made at the shows, simply called Live at the Blue Note, but this sequel, What’s Up?: The Very Tall Band, repeats none of the material from that album, and serves as proof that everything the trio produced on those dates — with young drummer Karriem Riggins keeping pace — was nothing less than sublime. Peterson and Jackson (who has since died, as has Brown) allow each other all the space required to stretch out, but the brightest sparks come from the spontaneous interactions. On the Dizzy Gillespie standard «Salt Peanuts,» Jackson is particularly sparkling, and Peterson makes the most of Lester Young’s simple, unhurried «Ad Lib Blues.» But when the quartet is locked into a groove together, as on «Limehouse Blues» and «The More I See You,» that’s when the specialness of this rare occasion is made clear once again. ~ Jeff Tamarkin, All Music Guide

The Very Tall Band at All About Jazz
By FRANZ A. MATZNER, Published: February 8, 2007
Like director’s cuts, material scrounged from studio archives isn’t always worthy of release. As with scenes that belong on the cutting room floor, some tracks, particularly from live performances, should remain closeted away—or at the very least held for box set bonus tracks targeting the completist.
Hearing the seven tunes presented on What’s Up?, however, reminds us that some moments should never have been allowed to slip by in the first place. Presenting previously unreleased material recorded during a three-day live performance at the Blue Note in 1998 by Oscar Peterson (then 73), Ray Brown (72), Milt Jackson (75), and a young Karriem Riggins, What’s Up? grants listeners access to three veteran musicians as they stroll their way through a loose, effervescent jam session.
A wonderful companion to the originally released material, these seven tracks provide insight into what happens when three masters take the stage without a script. The music resonates with three lifetimes of experience, and it is clear from first note to last that their individual styles were veritably made for each other. Brown’s deep swing propels each track, while Jackson and Peterson glide effortlessly through classic bop pieces like «Salt Peanuts, the blues tunes «Ad Lib Blues and «Limehouse Blues, and mellow ballads like «The More I See You.
Both Jackson and Brown passed away within a handful of years after this three-night gathering, which makes What’s Up? an important document of a historical moment near the end of these musicians’ extended, influential careers. But producer Elaine Martone has done more than resurrect an evening of music for documentary purposes. This is music of venerable character, to be enjoyed simply for the musical joy it expresses.

The Very Tall Band – Live At The Blue Note

Review
by Richard S. Ginell
This is one of the best post-stroke Oscar Peterson sessions in the catalog, thanks in great part to the distinguished company he keeps (Ray Brown and Milt Jackson) and the stimulating atmosphere of the live setting (New York’s Blue Note club). Right from the first track, «Ja-Da,» you can tell that this is going to be a fun session, as the slippery, swinging, totally interlocked, totally assured way in which these vets react to each other kicks in immediately. Peterson’s right hand is fleet, feathery in touch, and bluesy in feel; the left providing just enough punctuation, and at 75, Jackson’s bluesy eloquence had not diminished in the least. Ray Brown’s time and placement of notes is, as usual, impeccable, and the very talented drummer in his group at the time, Karriem Riggins, provides a swinging kick for the quartet. In the spirit of democracy, each star gets a solo number — Peterson plays his ballad «When Summer Comes,» Jackson pours out a doleful «Nature Boy,» and Brown’s stream-of-consciousness medley eventually attracts the funky brushes of Riggins. But it’s always better to hear them together.
allmusic 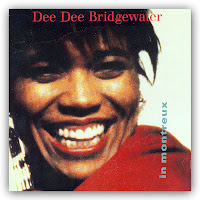 Dee Dee Bridgewater’s move to France awhile back has resulted in her having a relatively low profile in jazz. This excellent live set should help restore her reputation.
Whether it be a three-song Horace Silver medley, the warhorse «All of Me,» Jobim’s «How Insensitive,» «Night in Tunisia» or the rarely performed «Strange Fruit,» Bridgewater ( who is backed by a French rhythm section ) is in top form, singing with swing and sensitivity. ~ Scott Yanow, AMG 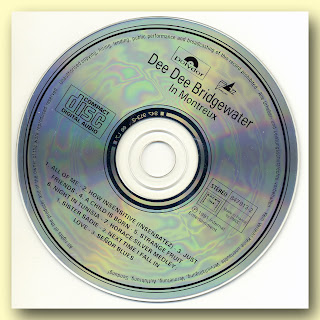